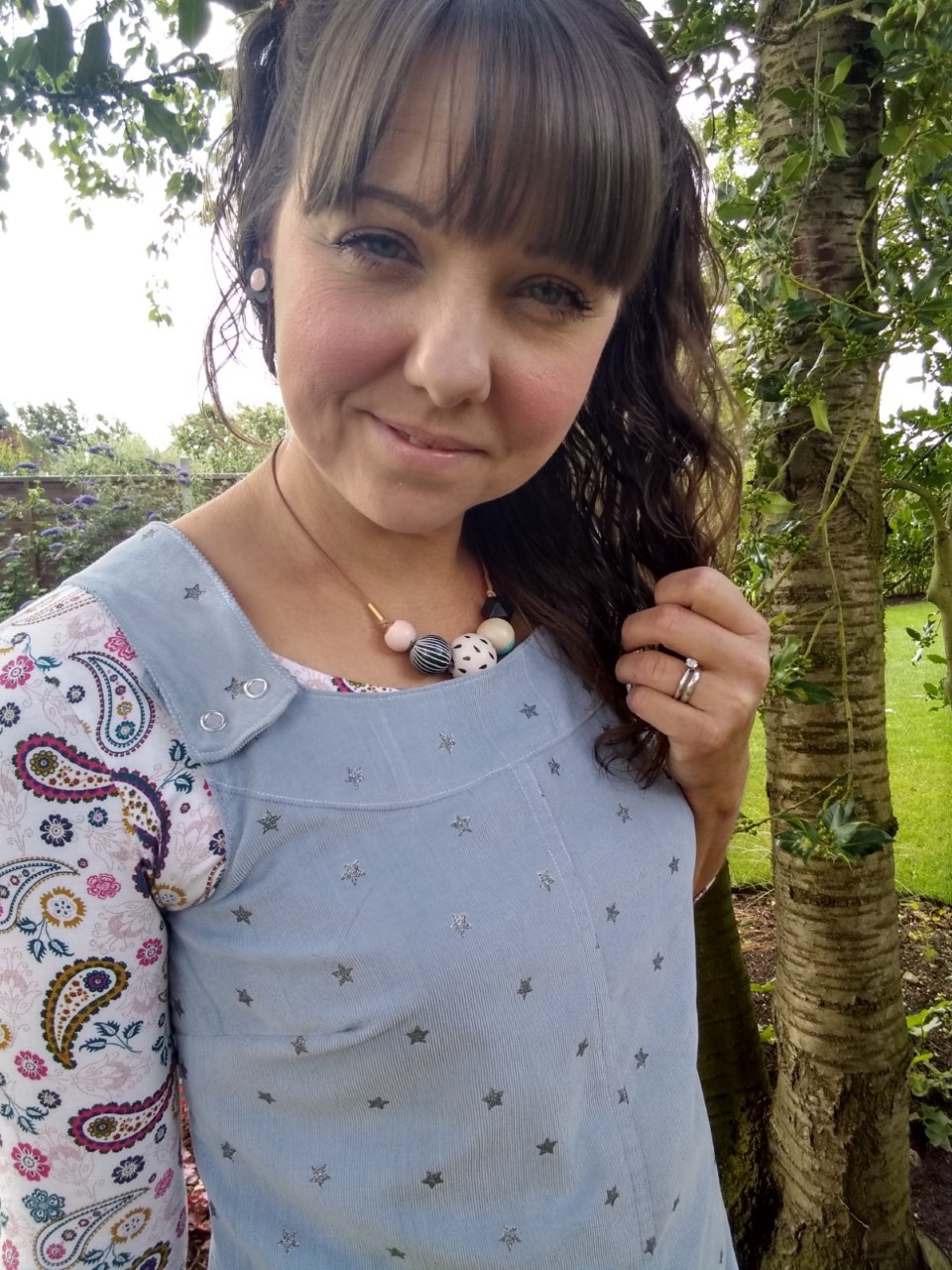 Hi everyone, my name is Karen – known as Sew Little Time on YouTube and @sew.little.time on Instagram.  I’m so happy to be contributing my first pattern and fabric review to the Felicity Fabrics blog.  When Caroline & Fliss asked me to join their blogger team, I was so excited to get started, and promptly went onto their website to have a browse through all their wonderful fabrics.

I already had an idea of what pattern I wanted to sew; which was the Jennifer Lauren Handmade Ivy Pinafore.  I already had this pattern and had been meaning to sew it up for a little while.  I have a little bit of an obsession with pinafore dresses and had seen some lovely versions of this dress.  The Ivy Pinafore is fully lined, and although I knew this step would take some extra time and fabric, I knew the finish would be neat and would enable me to wear the dress in the cooler months with tights.

I chose this gorgeous fine needlecord fabric for the outer dress, which has little silver stars all over it.  When the fabric was hanging on the washing line, the sun made the stars glisten and sparkle beautifully.  For the lining I chose a navy polka dot lining fabric as a contrast to the light blue needlecord and I really like how they look together.  I found the lining quite difficult to work with as the fabric had such beautiful drape and movement, so I used some spray starch to stabilise it before cutting it out.  This worked really well and also helped with sewing it too.

The Ivy Pinafore has two style options – one which is a very full swing style dress and one with a more fitted silhouette – which is the one I went for.  I firstly made a very basic toile to test for fit and chose the size 8.  One thing I really like about this Pinafore, is the fact it is fitted with bust darts.  The top of the dress also has a yoke section and you have to gather this to fit, and unfortunately, I hadn’t added this on when making the toile, so didn’t realise this would bring the top of the dress in slightly.  When I had near enough finished the official dress, I realised it was too tight across my bust!

The front and back of the dress have a centre seam and you sew the front one as a flat fell seam.  For my first attempt at making the dress, I found sewing the flat fell seam a little fiddly with such a soft fabric and it didn’t look all that neat.  I also wasn’t happy with my attempt at fitting the yoke and then after realising that the dress had turned out a little small, I decided to try a second attempt at sewing the dress in the next size up, which is the size 10.  Luckily, I had just enough fabric to cut the pattern out again, however, I did have to add a centre seam to the back yoke pieces, but I don’t think this looks too bad!

One thing I noticed is that there isn’t a notch at the bottom centre of the front and back yoke pieces, to line up with the top of the dress where the centre seams are, so I made sure I added a snip to enable me to line this up correctly.  So, on my second attempt of sewing the dress, the yoke looked so much neater.

I decided not to sew the front of the dress using a flat fell seam and changed this to a faux one.  To do this I followed the instructions from the Tilly and the Buttons Cleo Pinafore pattern, and this worked out so much better.  The back seam is just sewn as a normal seam as there is a curve on the back pieces to fit the shape of your body.  Before sewing any seams together, I made sure that I’d finished all of the raw edges with my overlocker.

Once you have topstitched the yoke, you are supposed to add buttons and buttonholes to the straps, but I didn’t have any buttons large enough and also thought snaps would look quite nice instead.  I chose to add these little silver snaps, which show the fabric in the middle and I think they contrast really nicely with the silver stars.

For hemming, I overlocked the raw edge of the lining and then turned it up by 2cm, then topstitched into place.  For the outer fabric, I firstly overlocked the raw edge and then made my own bias binding from a pillowcase and added a bias bound hem, also topstitching this in place.  I really like the finish this gives and It also adds a little bit of stability to the hem, so it doesn’t curl up after sitting down.

I am really happy with how this dress turned out in the end and I learnt a lot from this project.  It has been one of the more trickier pinafore dresses that I’ve made, but I enjoyed the challenge and will definitely make one again, but perhaps in a heavier fabric like denim or canvas.

Thank you very much for reading…until next time – Happy Sewing 😊. 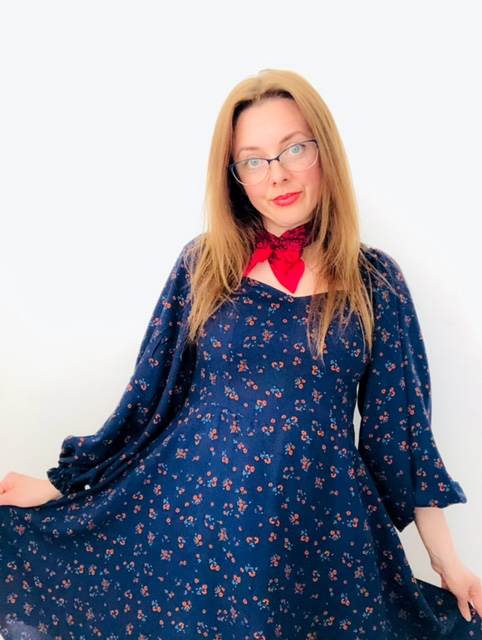 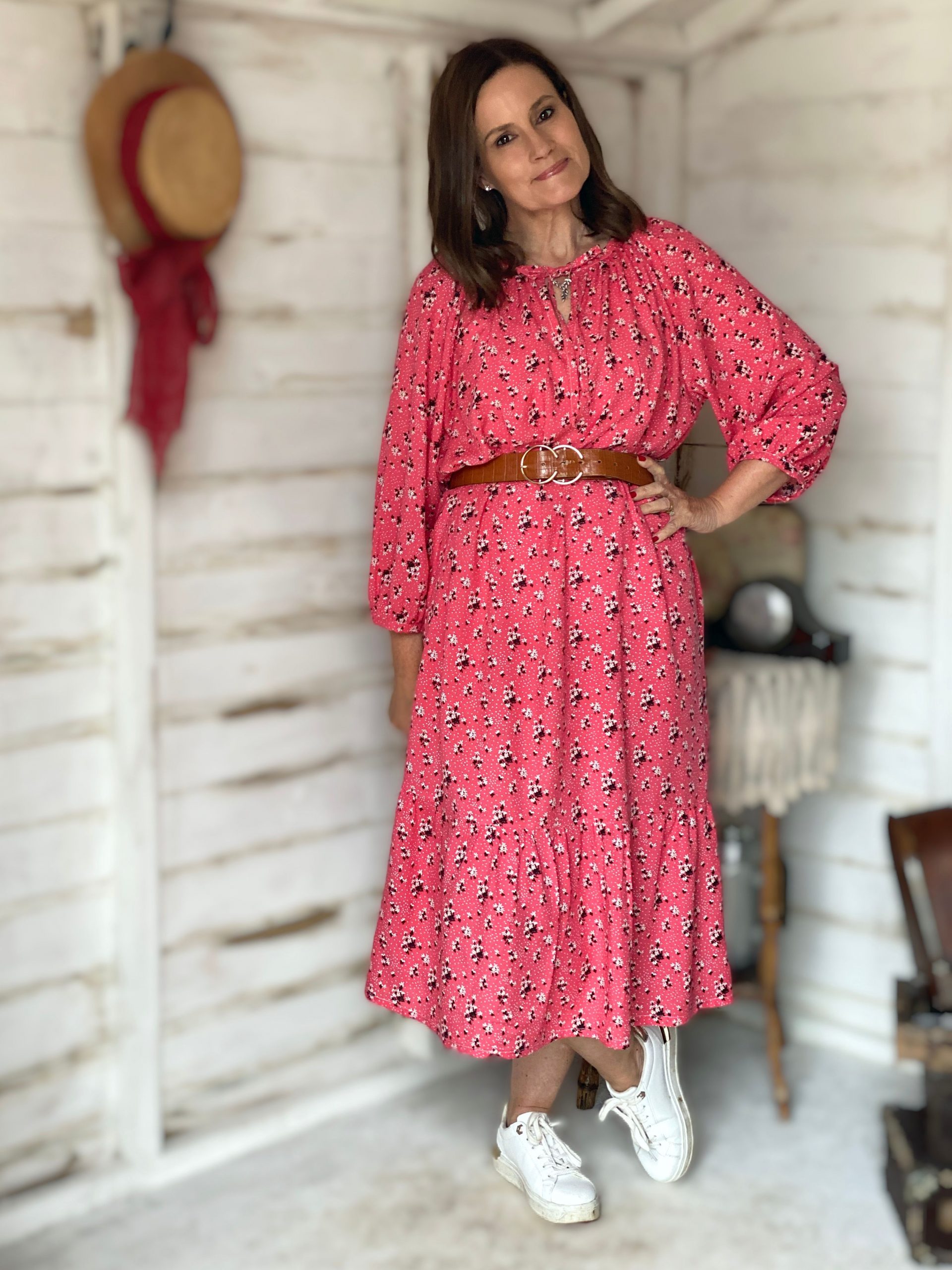 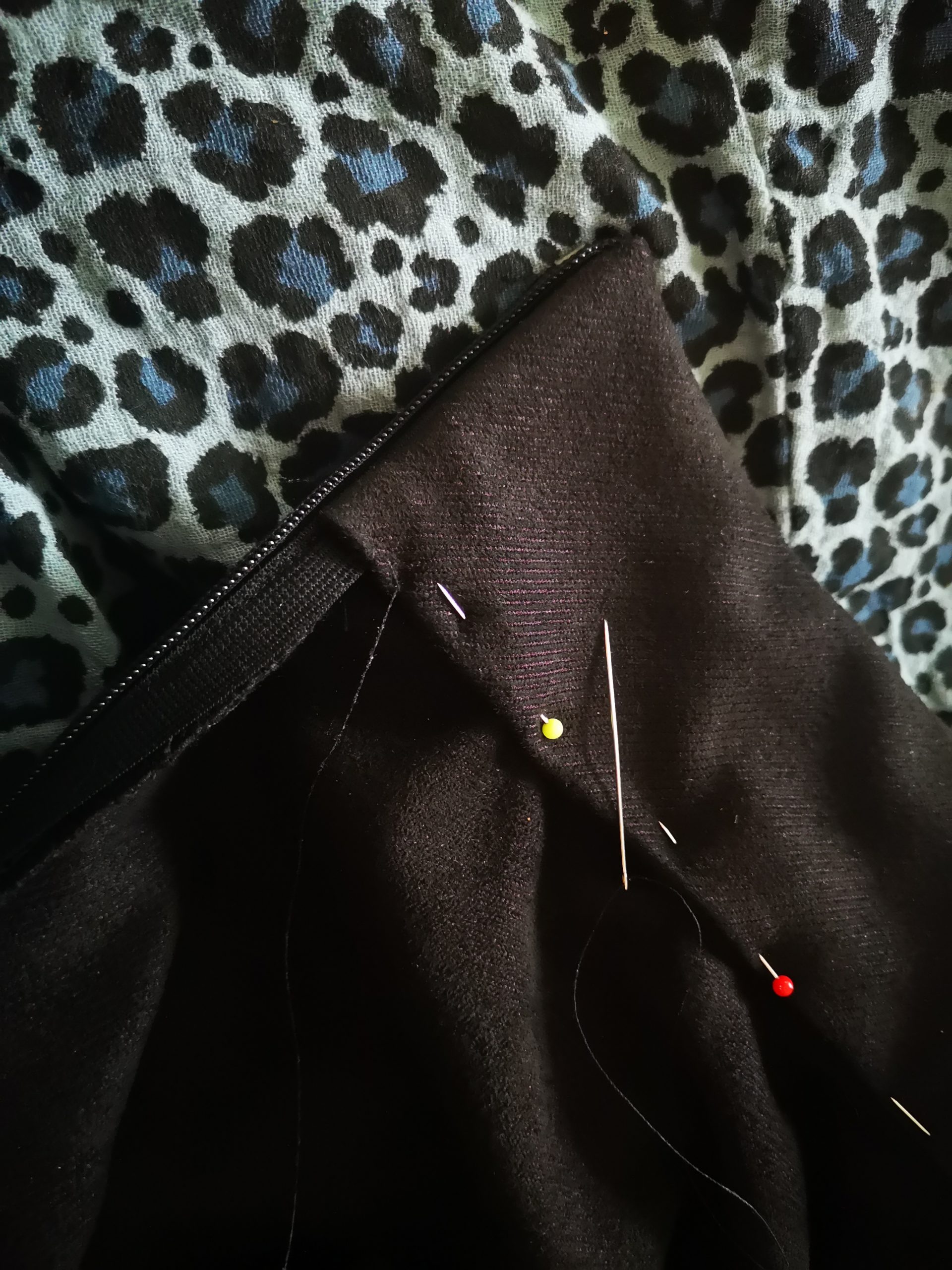 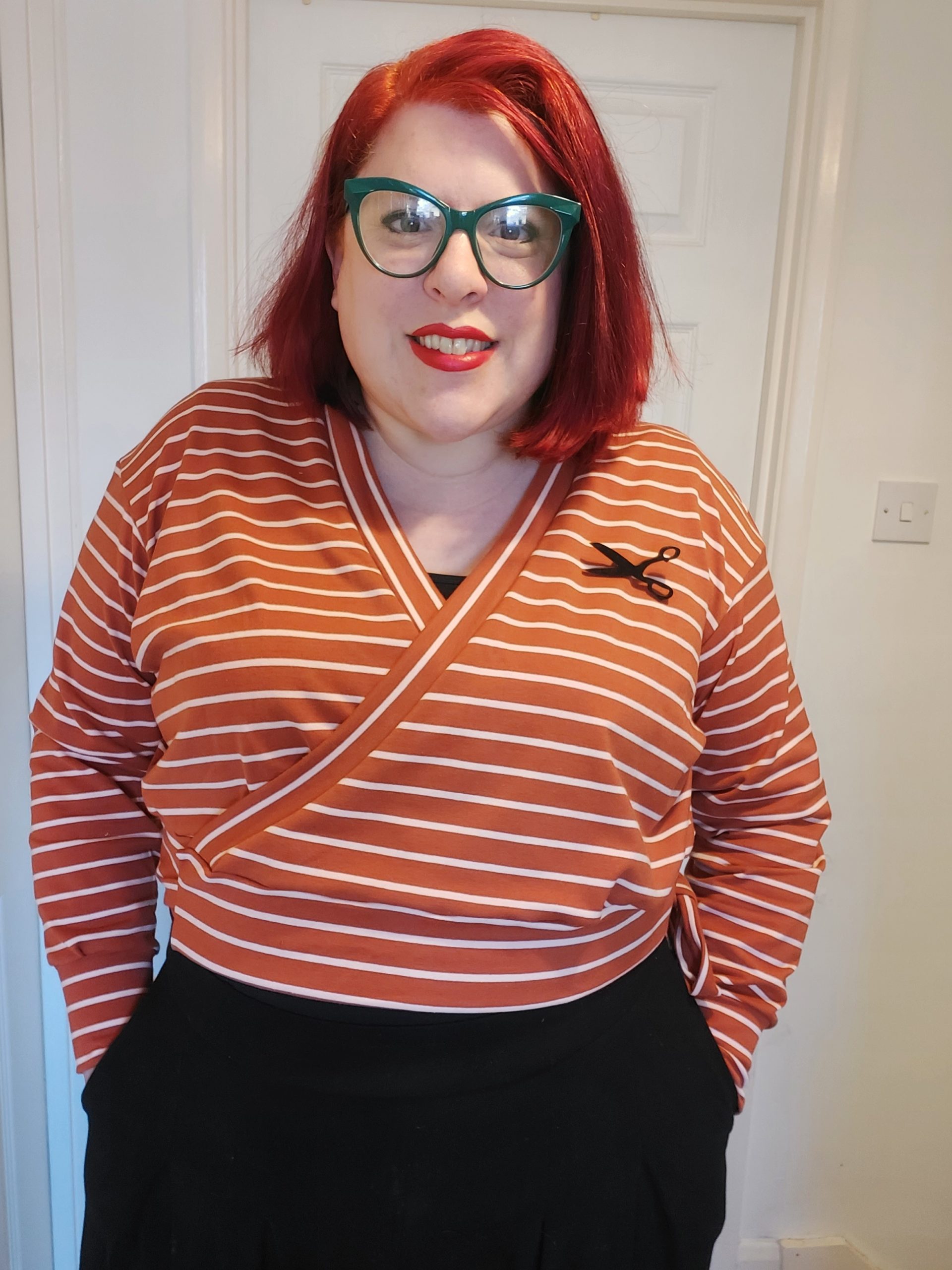